For those that make additions to this article, please include relevant Versions/Revisions, dates, and ample details (and hopefully fixes / workarounds).

Please Do-Not post things in here that haven't been discussed in the forums prior, or with a developer.

Resize bugs are unrelated to boot-files and kernels.

When an image is uploaded as "resizable", the resync process immediately after resizing does not occur. This means that although partitions were actually resized on the host, the upload used the prior partition data pulled from the drive and not the new information. Resize bugs seem to sneak in from time to time. If you find it in a current FOG Trunk revision, post it to the forum so it can be addressed.

When downloading an image to hosts that have a smaller size HDD than the source machine, errors are encountered and imaging does not complete.

Some hosts will never get to the partclone process, some hosts do but fail during the imaging process.

Verifying your image is affected

Run this command on your host: 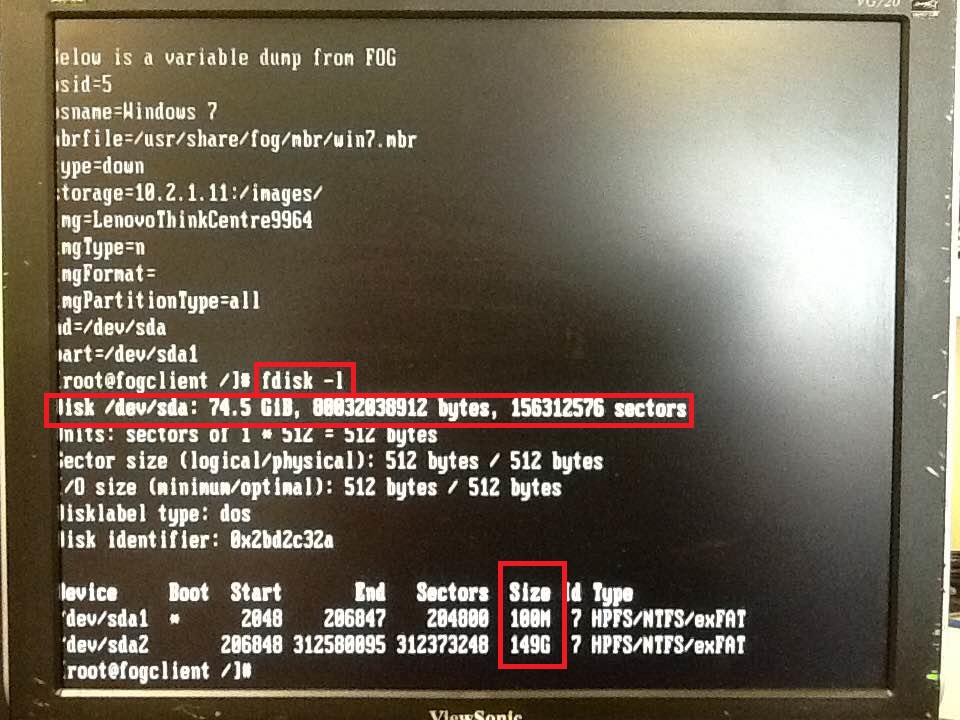 If the partition data is larger than the size of the installed HDD, your image is affected.

To fix the image, first update to FOG r3396 or later, and install an HDD of equal or greater size than the source machine had.

Deploy your image to this host with the larger HDD.

Boot the host and verify all is well.

Create a new image, be sure to mark it as "resizeable" along with any other necessary settings, and assign this new image to the host using the FOG Web UI.

Create a new upload task, and upload the new image.

The new image should now be able to deploy to hosts with smaller HDDs than the source machine.

You may now delete the old image.

For those that do not have access to their DHCP server, or have a device (such as a home router/switch/dhcp combo device) that doesn't support modification of DHCP settings, or simply don't have any DHCP device on their network, they normally would use dnsmasq for ProxyDHCP.

The dnsmasq .0 bug is quite simply - dnsmasq changes the extension of the bootfile information handed out to .0

For example, say we must use dnsmasq and want to use undionly.kpxe as our bootfile.

When we configure dnsmasq to hand out the bootfile info:

dnsmasq will instead hand out:

Every FOG server using dnsmasq is affected by this bug.

Working around the bug

Assuming we will be using undionly.kpxe as our bootfile, there are two possible work arounds. Both are very simple.

Symbolic link the file to the correct name